The Translink Ulster in Bloom competition showcases partnership working between councils and local community ‘In Bloom’ Groups and Associations under the headings of Horticultural, Environment and Community. The competition is promoted across all council areas from February to August each year and three Translink Ulster in Bloom council and community engagement events are held each year: launch (June) results announcement (September) and winners’ (March) event.

To encourage wide participation in the competition from across the region, there is no fee for councils to enter and, since the reform of local government in 2015, all the 11 councils have supported the competition with entries.

As part of the Translink sponsorship, we introduced a floral station category to the competition. Translink provide a list of manned stations. These are judged against set criteria, which includes; floral effort, cleanliness, achievement, overall appearance and impact to the visitor.

The core competition criteria, Horticultural, Environment and Community, help to instill local pride, create awareness of the environment and biodiversity, encourages cross community participation and involvement for those of all ages and abilities. The competition is judged July – early August, volunteer judges travel in pairs and follow prepared itineraries so that every place is visited over the key summer period. Besides selecting the best cities, towns, villages, stations etc., judges also make a few special awards and choose those places likely to best represent Northern Ireland in the national RHS Britain in Bloom competition.

Translink Ulster in Bloom is accepted as a regional heat of RHS Britain in Bloom.

We have a great reputation for the quality of our entries in RHS Britain in Bloom and this has generated excellent PR for everyone involved in the competition. In 2018, the National RHS Britain in Bloom finalist event was held in Northern Ireland, this is the first time the event has come here. Over 450 finalists, representing 76 communities (5 from NI) celebrated at the Waterfront Hall on 19th October 2018. 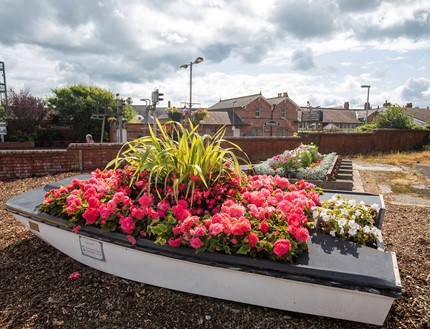