ALL NI COUNCILS ‘GET ON BOARD’ ANNUAL GARDENING EXTRAVAGANZA The 2016 Translink Ulster in Bloom Competition was officially launched today (June 21) in Ballynahinch, Co Down.

The 38th year of the annual horticultural competition has attracted 124 entries representing all local council areas as well as 32 bus and train stations.

“We are committed to bringing more people to cities, towns and villages across Northern Ireland by bus, coach or train. That’s why we recently launched our ‘Get on Board’ strategy outlining our plan to transform public transport and support the prosperity of Northern Ireland.

“As part of this strategy, we recently held our first ever Bus + Train Week to promote all the benefits of public transport, which include supporting economic growth, retail and tourism, social inclusion and active lifestyles. We were pleased to have support from all 11 Councils and look forward to building on these partnerships throughout the summer when we will also have an attractive range of good value travel tickets to help more people explore Northern Ireland.

“We recognise the valuable contribution Ulster in Bloom makes to developing local areas, making them more attractive places to live, work or visit. We would like to thank all councils, businesses and community groups for supporting the competition and look forward to enjoying their beautiful displays over the summer months,” said Frank.

“Translink Ulster in Bloom celebrates the successes that can be achieved when councils, “Bloom” committees, residents and businesses, come together to take pride in the places where they live and work, and together create a better environment for everyone to live in.

“NILGA represents, promotes, sustains and improves local government on behalf of its new 11 member councils. On behalf of NILGA, I would like to convey our admiration, appreciation and encouragement to each and every one of you here today.

“With the ongoing partnership support of the 11 councils and our sponsors Translink, the Association aims to build on the culture of the competition, growing it into the future, particularly through the opportunities provided by council community planning powers, championing the role of communities in decision making and take pride in the places we love,” said Freda.

Translink is asking the public to celebrate their ‘Best Blooms’ by simply tweeting photos to @Translink_NI #ulsterinbloom highlighting where they were taken and they’ll be included in an online album of all the beautiful displays blooming across Northern Ireland. The top 10 photo entrants will also win a week’s free Translink travel*. 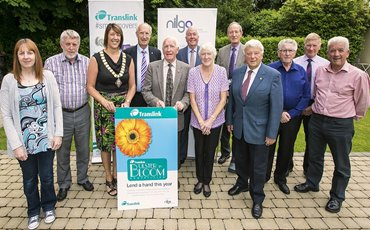