The Communities Minister’s announcement this week retaining Regeneration Powers during the Assembly’s mandate will have significant impact on councils and how they can drive economies and sustain communities. 20 months into new councils, a new power has been withheld.

“It’s no secret that this marks a policy turnaround from what we and local government wanted and were told we were getting. We will of course continue to work with partners in government, and we acknowledge the work being done to enable rural and small settlements to benefit from regeneration, but the Programme for Government now being developed simply must properly resource councils and lead to utterly changed, bottom up delivery models which pool resources and investment and secures fully formed, fully delivered community plans – investment regions. In practice, just for now, we are resolved, like all councils, to do the best we can with what we’ve got, but clearly, we will persist in our commitment to lobby for Regeneration to come as soon as possible to councils, it just makes more economic sense”.

In closing, Councillor McPeake said, “The decision taken by the Minister doesn’t seem to marry with Outcomes Based government. However, we will work constructively within the Central Local Partnership Panel and outside it to advocate for this and other Powers. We call upon The Executive Office to support NILGA’s request to establish an All-Party Group on Local Government Development & Investment here – to consider a whole change of governance brought closer to real people and communities, mirroring what’s happening in all neighbouring jurisdictions”.

“Without this, the role of local government will still be service not place based, in four years’ time. That would be a massive economic and democratic missed opportunity”. 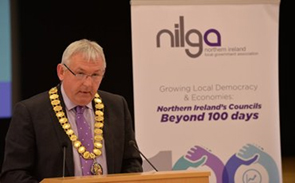