Councillor Seán McPeake, NILGA’s President said “It was, believe it or not fifteen years ago that the first thoughts of the Review of Public Administration were being uttered, and even fairly recently in 2011, many people said “it won’t happen”.

“Well it has happened folks…..and let me state quite clearly that without our local government association (NILGA) and our other various key and influential partners we would have had a very weak and disconnected local government. Instead, in October 2016, we are strong, connected and have an opportunity to meaningfully develop our economies, to assist in job creation, to tackle disadvantage and social exclusion within our communities and to deliver major investment in the councils through new ways of raising finances without raising rates”.

“Conference, we are soon to be equal strategic and policy partners, want to see through further reform, more modernisation, and greater democratic representation, powers and services through our 11 local councils. We and the wider public know that we are just at the beginning; things are not all rosy in the local government garden but working in close partnership with SOLACE, our sponsors and partners, like Ulster University and the departments in government, we can totally reinvigorate our public services.  Ministers should call upon their Departments to co-invest in local services through local councils. Then you will definitely get better results. Otherwise we will not live up to the much spoken about promise of outcomes based work for local people”.

“NILGA's work continues to ensure that the economic impacts and associated issues facing communities in regard to Brexit, have been noticed by Westminster and the Secretary of State. I hope that we can also be part of the Executive’s work, since the 11 councils put £100 million per annum into communities directly and indirectly in terms of EU funding – it is essential that we are formally included in a work plan for the future”.

Michael McQuillan, Director, Business Institute, Ulster University said: “As Northern Ireland’s civic university we are working hard, with local councils, to build and sustain the enterprise and entrepreneurial ecosystem that is necessary in helping local communities thrive and reach new heights. The conference is a significant opportunity to build, further, the productive conversation and the impactful partnerships that are vital to growing Northern Ireland’s global economic impact through local people and local enterprise”.

In closing Councillor McPeake said “NILGA will keep delivering for local government because there is no time in the sector we support for anything other than vision, hard work, unity, openness and delivery”. 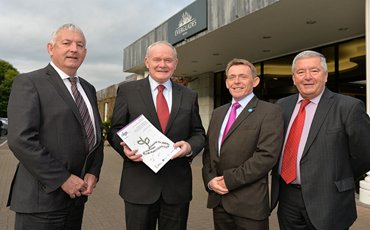