A special results ceremony took place in the stunning surroundings of Ballyscullion Park – Magherafelt, with the 40th anniversary year of the competition attracting 121 entries representing all local council areas as well as 31 bus and train stations. 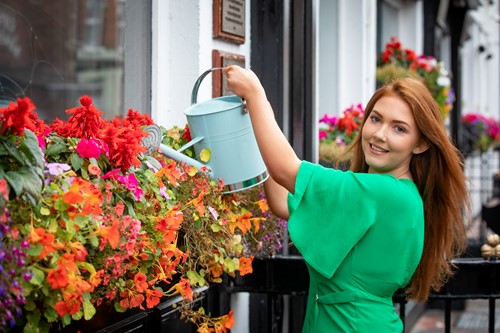 The ‘Most Improved’ titles went to Ballymoney and Dungiven (both Causeway Coast & Glens BC) and the ‘Roses in Towns’ award winner is Lisburn (Lisburn & Castlereagh City Council).

James Perry from Ahoghill Traders’ Association (Mid & East Antrim BC) is the winner of the Ulsterbus Tours Community Champion Award in recognition of the lasting and positive difference he has made to his local area by embracing the ‘Ulster in Bloom’ ethos.

Northern Ireland has also now secured 5 entries going forward to the National RHS Britain in Bloom Competition 2018* with the Awards taking place in Belfast this October.

This is the 20th year of Translink’s sponsorship of the competition. Speaking at the results announcement ceremony, Translink Chairman Frank Hewitt, said:

“This milestone year of Translink Ulster in Bloom has produced many exquisite entries and I’d like to congratulate all the 2018 winners and runners-up! It’s been another highly competitive competition and we continue to see a trend for new locations hitting the top spots.

“Our thanks to all the local councils, businesses, community groups and Translink employees who work hard to make Northern Ireland a more attractive place to live, work and visit.

“It’s also fitting that the Translink Ulster in Bloom results are announced during Good Relations Week with the competition focussed on connecting people, team-work and building better communities.

“Like Ulster in Bloom, Trainslink remains committed to building a more sustainable society and we’ve been busy transforming public transport to support the growth and prosperity of villages, towns and cities across Northern Ireland.

“Last year, we delivered 81million passenger journeys – the highest number in the past 20 years – and we continue to work collaboratively with local councils, businesses and community groups to deliver further growth and make public transport your first choice for travel in Northern Ireland.” said Frank.

“As Vice President of NILGA, it is my pleasure to convey the Association’s admiration and encouragement to each of you today.  Not just for your support in this the 40th year, but for your many years of championing the “In Bloom” message of councils, local committees, residents and businesses, coming together to take pride in the places where you live and work, creating a better environment for everyone to share.

“These things are now more important than ever. While NILGA wants a restored and effective Stormont as soon as possible, almost two years on and local government is the only functioning level of government in NI.  Despite the backlog in terms of legislation, policies and resources, NILGA is determined that local councils are resourced and have the freedom to continue to deliver vital services and investment in the very communities that Ulster in Bloom takes place in across NI.

“As NILGA, councils and councillors, the competition helps us to focus on improving the quality of life for citizen’s right across the region, congratulations to everyone involved for your ongoing support and enthusiasm.” said Alderman Donnelly.

THE RESULTS OF THE 2018 TRANSLINK ‘ULSTER IN BLOOM’ COMPETITION ARE AS FOLLOWS: